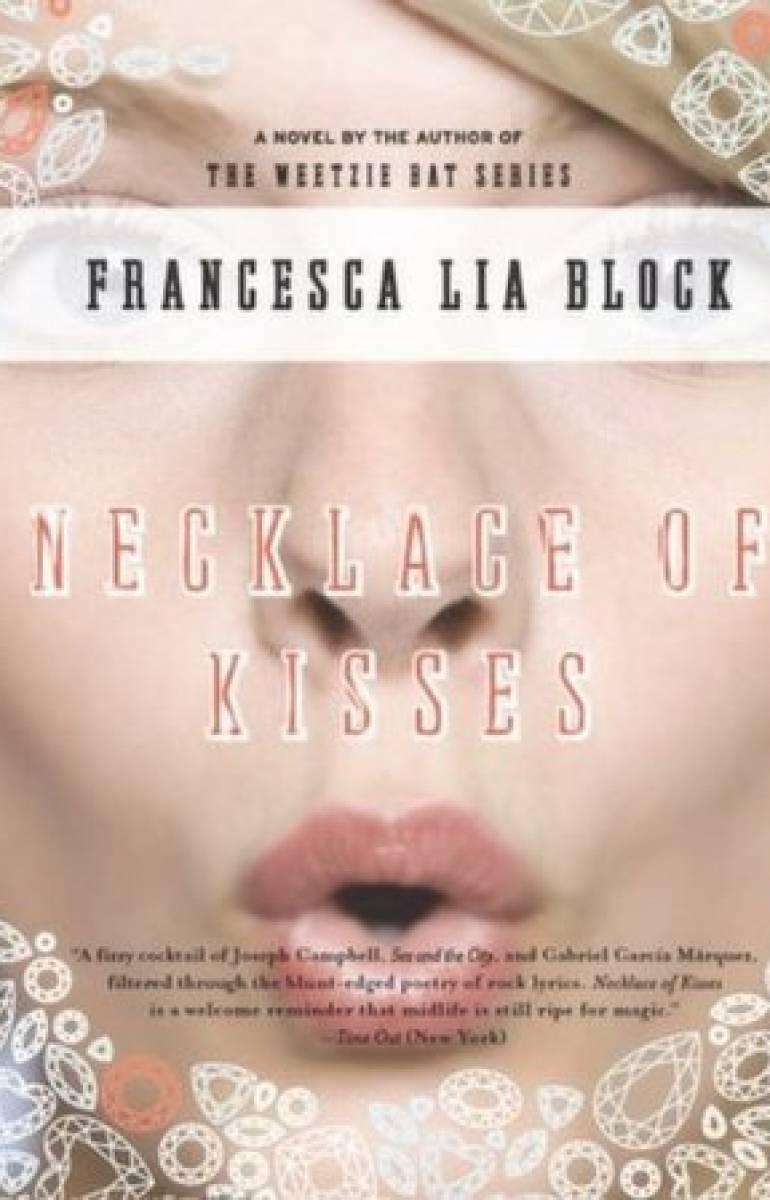 "Necklace of Kisses is the most lustrous gem in the necklace of Weetzie Bat stories. I read it on the plane and had to hide my tears from the woman seated next to me."
~ John Cameron Mitchell, Hedwig and the Angry Inch

"The self-parody is as wonderful as ever -- Weetzie doesn't have to save the world; she can just go shopping -- and, as always, the magic is in the detail: wearing her raspberry snakeskin sandals, dipping her roll in olive oil and basil, surreal stuff happens... the celebration of the silly and the magical in a scary, sad world will appeal to all those once-teen fans who remember Weetzie and, just like her, now need a rewrite."~ Booklist

"Weetzie's many fans will most appreciate this reunion...but those just meeting Block's whimsical entourage and sparkling prose will also appreciate the book's message: that magic can be found in stolen moments and, in Dirk's words, though 'love is a dangerous angel,' it's well worth the risk."~ Publishers Weekly (starred review)

READ A REVIEW and Q & A with Francesca from Publisher's Weekly where Necklace of Kisses received a starred review. [you need Adobe Acrobat to open the file]

"With vivid imagery, Block has conjured another enchanting and lyrically surreal journey of love and self-discovery."~ Library Journal

"Block's fairy tale of personal transformation succeeds as a great summer read -- a fizzy cocktail of Joseph Campbell, Sex and the City, and Gabriel Garcia Marquez, filtered through the blunt-edged poetry of rock lyrics. Necklace of Kisses is a welcome reminder that midlife is still ripe for magic."~ Time Out New York

"Block uses the fairy take motif as a vehicle to convey the tangled-up truths that girls face on the road to becoming women. Through Weetzie and other characters, [Block] explores both societal and personal fears surrounding sexuality, power, food, death , drugs, love, creativity, depression, and loneliness in ways that are as inspiring as they are transgressive."~ Bust Magazine

"Lyrical...Weetzie is something like the hipster step-child of J.K. Rowling and Judy Blume...Necklace of Kisses offers Weetzie a chance to come to terms with who she was and who she has become, and the result is a heartfelt work of adult fantasy that sings in many voices....Necklace of Kisses also reinforces what a lyrical but economical writer Block is. One of the best books of the summer ~ Salon.com

"The punk rock loving, thrift store dressing denizen of Los Angeles' West Side is back among the colorful, smog-filtered sunsets and brightly painted boulevards that have long inspired the muse of her creator." ~ Associated Press

"Shot through with doses of magic realism, this ethereal novel looks at the life of a middle-age woman through kaleidoscopic glasses." ~ Chicago Tribune